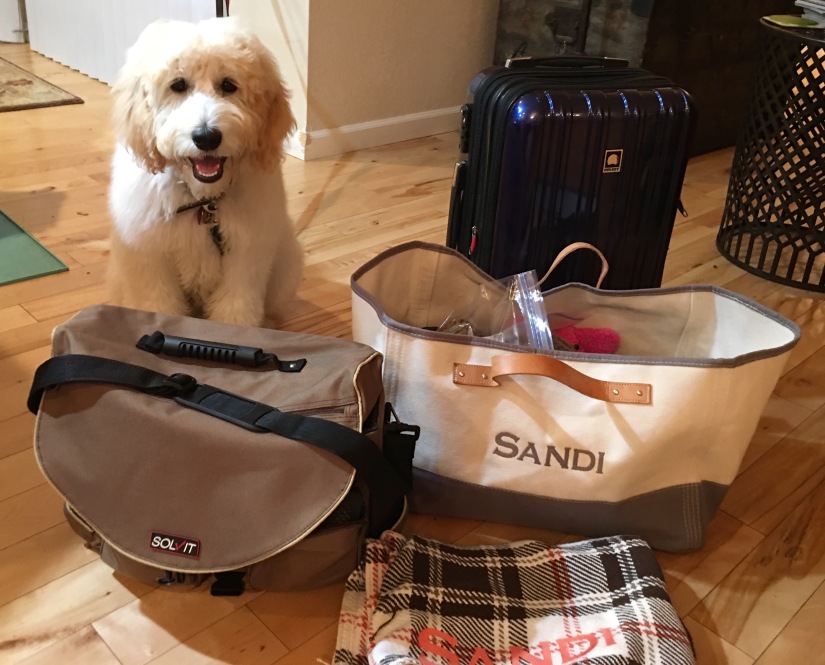 Taking a puppy on vacation for the first time takes courage. Seeing a place through your dog’s eyes is a delightful new experience. Sandi was on a first name basis by day two into our trip. People I didn’t recall seeing, already remembered Sandi’s name. “Hi Sandi!” Bellmen or shopkeepers would greet her. Traveling with a dog serves as a friendly bridge between you and a town full of strangers. Read all about Sandi’s first adventure in my latest published piece on johnnyjet.com here.

Lori is a single mom of an adventurous 14 year old boy named, Ames and a well-behaved goofy labradoodle dog named Sandi. They live in Austin where they love to hike, cycle or do anything on the lake. Lori grew up as an Air Force Brat which meant moving 8 times before heading off to college. Their moves included two tours overseas in England and Germany. Her mother was the Officer's Wives Club tour chairman in Germany and Lori often got to join her on trips to various parts of Europe. It was while living in Germany Lori learned to ski as a member of the Sitzmarkers ski club. Just about once a month for four years Lori got to ski in Germany, Austria, Switzerland and France. She joined her father at Swiss Ski School one year. Lori's passion for travel never left her. Her main career has been in advertising as an award-winning copywriter where she's worked at top global ad agencies in New York, Chicago and Los Angeles. It was while working on a tourism account (Park City) that she decided to pursue more travel writing. She's a graduate of Book Passages Travel Writing and Photographer's Workshop. Her travel writing is published in The Los Angeles Times, The Dallas Morning News, Shape, Women's Health & Fitness, divinecaroline.com, Coloradoski.com, Johnnyjet.com and her story, "Scared Shitless on Safari" was Editor's choice in the award-winning/New York Times Best Seller, Traveler's Tales' anthology Sand in My Bra & Other Misadventures: Funny Women Write from the Road. In the parenting writing arena, Lori is published in Dallas Child, Dallas Baby and Thrive magazines as well as divinecaroline.com. Her estate-planning piece, "Where there's a Will there's a Way" won the gold award for best feature in Parenting Publications of America. Globetrottermom is dedicated to parents who want to get out and explore more with their kids (and occasionally with four-legged fur babies in tow). You'll find destination pieces, gear reviews and tips on getting the most out of your travels with kiddos, dogs and girlfriend getaways. View all posts by globetrottermom